My coverage of the 2014 vintage of Bordeaux is now online.

Links to my Tasting Notes and Scores (including many that are not on the Spec’s 2014 Offer) are at the bottom of that page.

Below is a sample of what you’ll find … 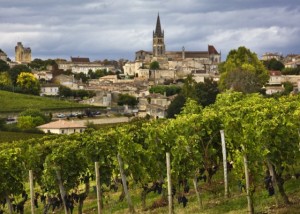 Every year, I go taste in Bordeaux the last week of March and first week of April. That trip is built around UGC (Union des Grandes Crus) Week or “Premieres Week” which offers a chance to taste the most recent vintage (this year that is 2014) of Bordeaux prior to the wines being released for sale to the trade as futures. And a lot of other wines. My schedule is a mix of tasting visits to chateaux and to negociants’ offices with the odd tasting elsewhere thrown in. We will make as many as 14 stops a day., all of which are tasting visits with little to no time to ogle barrels and tanks. There are some lunches and dinners and even a couple of parties but the focus is on tasting and evaluating as much wine possible in a two week period. In that time, I will taste (or in some cases drink) over 1,200 individual wines and make notes on maybe 800-900 of them. Some wines are not good enough to take any moretime on and so don’t even get a note. Some are older vintages and some are the sort of wines not sold as futures. Of the 500 or so notes I took on 2014 wines about to be offered as futures, many are duplicates where I tasted the same wine a second, third, or even fourth time during the week either because I had an iffy sample or to confirm just how good something was. In all, I found up with 200 or so 2014 wines I liked. Once the prices were released – which happened over about a five week period – I bought the wines that made sense from the combined angles of price, quality, sales history, cooperation, and local preferences. This year, I have so far bought 104 wines for Spec’s and will add a handful more. These wines are now on offer to Spec’s customers.

Why should you care? Because 2014 is a very good to excellent, quite pretty vintage that, for many people, will give more drinking pleasure than the “best” vintages such as 2010, 2009, and 2005. And because it is – due to a combination of market factors and the dollar-euro exchange rate – a very affordable vintage that will never be cheaper than it is now. Having said all that, I’m talking only about a particular subset of the fewer than 300 fairly well-known chateaux (out of more than 6,800 total wine chateaux) in Bordeaux . . . (read more)